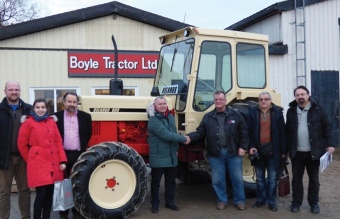 When Dave McHenry first decided to purchase and restore a 1984 Belarus 820, he didn’t expect it would garner much attention. But what started as an amusing diversion culminated in a visit from Fiodar Damatsenka, the General Director of Minsk Tractor Works (MTZ) in Belarus. Damatsenka had been visiting distributors in North America, and when he heard that Boyle Tractor Ltd. had restored the Belarus 820 for McHenry, he made a point of stopping in to the Fenwick shop to see it for himself.

“It was a lucky coincidence,” he said through an interpreter, noting that it was nice to see someone putting so much effort into restoring one of their machines.

McHenry had made the purchase because he liked the look of it, and thought it had some unique features that were unusual for typical Canadian equipment.

“I liked the style of it,” he said. “And this tractor here has things like air break capacity and a couple of other features that we don’t have here. It’s very interesting.”

Belarus tractors were first sold in North America in the 1970’s. They sold over 50,000 units from then until the fall of the Soviet Union, when sales were disrupted. Recently, MTZ began to once again sell tractors in the U.S and Canada, where sales and marketing representative Arie Prilik claims there is a market for “a working man’s tractor”.

“Somebody needs a Rolls Royce, but somebody just needs a Chevy, for basic work,” he said. “I’m talking to the farmers and they are saying the price is great, but the main reason they are buying is that they are simple, they have no computers, no complicated electronics; basically if a farmer has a screwdriver and wrench he can work on it, he doesn’t need to bring the hundred and fifty dollar-per-hour computer technicians from the dealership.”

While agriculture, along with most other industries, is becoming more and more reliant on computers and programmable equipment, Prilik argues that a certain percentage of the population does not need that level of sophistication, and prefers a simpler machine.

“If you are looking at a dairy operation and the farmer just needs to feed his cows, he just needs a tractor that will start in the morning,” he said. “It doesn’t need all those sophisticated features. It’s just an extra cost and extra headache in service that the farmers don’t need.”

Having no computers also means that farmers can avoid the dynamic legal issues that have developed around equipment software “If you can remove this stuff you can give ownership back to the farmer,” he said.

Though McHenry’s tractor is not quite fully restored, he doesn’t expect to have any shortage of use for it.

“I might get a plow to put on it for doing the driveway, and I’m sure I’ll take advantage of those air brakes to pull trailers around the property,” he said. “Yeah, I’ll find thing to do.”

And if anything goes wrong, he should be able to fix it with just a screwdriver and a wrench.